My Shaman Ritual at Iximche 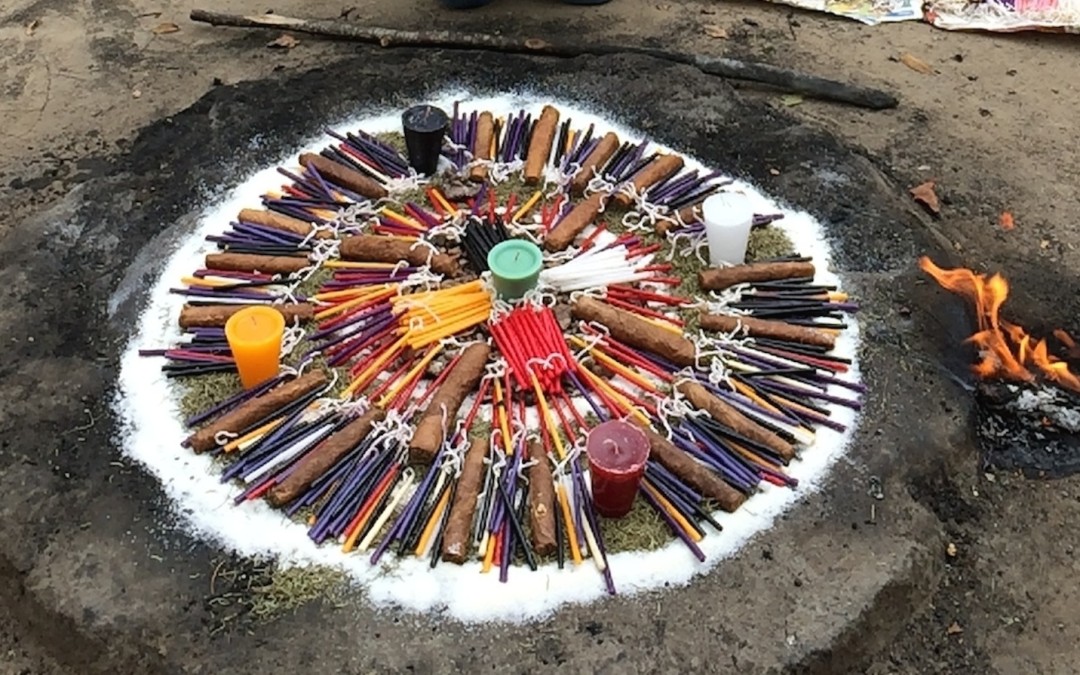 The Shaman ritual I experienced at Iximché (pronounced, EEE shim ché) was one of the most moving experiences of my life. When I arrived at this famed archaeological site, I didn’t quite know what to expect. I was anxious, but very excited! The parking lot was almost empty so I knew I had the place nearly to myself – I could enjoy this experience my way.

The sky was the bluest I had seen in Guatemala this trip – hardly a cloud in sight. There was a slight breeze and the air was crisp and clean on this beautiful fall day in the western highlands. I could smell the rain from the night before but today was pure magic. It was the kind of day that makes me want to take off my shoes, sit in the grass and read for hours. The ruins were not particularly grand (like Tikal) but they were considered extremely important. Iximche had been the last capitol of the Maya – consequently, the first Spanish colonial city, founded in July1524. That year is often recognized as the end of Maya history.

As my guide and I were exploring the ruins I could feel the energy of the complex – it was palpable. I had to touch the huge carved rocks that had once been walls. I touched the sacrificial altars and could sense the significance of the stones. While walking through the ball courts I tried to imagine the faces of the people in the crowds and the sounds of them cheering their team to victory. As I strode up the tall narrow stairs sideways I learned that their construction was a way to keep all that ascended from turning their back to the sun. I could feel my son’s ancestor’s presence.

Slowly, we made our way back to the area where the Shaman holds his ceremony. Amongst the trees, were four altars, all of which are still used today by the locals in this area and others, like me, that are seeking answers, healing or just to experience something profound. After brief introductions, the Shaman began telling us what he would be doing step by step and giving us some historical information about the area. He also explained what the different items on the altar represented.

The Shaman picked up each type of candle that was laid before me on his beautiful hand woven blanket and even those that he had laid symmetrically atop the altar. He explained what each color represented. Yellow candles symbolize peace, red symbolizes love, green is for the Earth (nature), white is purity (also spirits or visions), baby blue is for travel, pink is for heart, royal blue is the sky (purpose in life), purple is for the ancestors and black is for the offering (and can represent illness or sickness). The largest colored candles represented the four directions and ancestors. There were herbs on the altar – some of which attract certain spirits and some that repulse others. There were several cigars (which the ancestors seemed to enjoy) and the way they burned symbolized my life. There were glass jars that told the Shaman many things about my nature and how receptive I was to the universe and it’s teachings. The Shaman also used holy water and liquor on the fire as it burned – to purify and to entice the spirits to attend to my needs. The Shaman used a long, thick stick to stir the ashes as it burned and to mark north, south, east and west often. I took my time and smelled each item on the altar, touched every candle and internalized the energy of everything before me. As the ceremony began, the Shaman covered his head with a scarf to keep the spirits from entering him – so they would be present for me.

The Shaman began by lighting the altar on fire then invoking the spirits of Maximón (an important character in Guatemalan history who is revered by the Maya) and all the ancient powerful teachers and guides. He chanted and invoked the energy of all the important Maya temples – Tikal, Uaxactun, Yaxha, El Mirador, Naachtun, Quiriquá and more. He called upon the four directions (north, south, east and west), mother earth, the ancestors, as well as living Maya clans, places in nature, the elements and every conceivable spirit guide in the universe — regardless of faith, culture or location. It was powerful – VERY. The energy was exhilarating; I could smell the richness and intricacy of the fire as it burned – the wax, the herbs, the cigars, all-melting together to create a kaleidoscope of color and smell. I watched the smoke dance into the heavens and beckon the spirit’s presence as the fire intensified.

Next, the Shaman asked me to throw in a handful of white candles (white represented my spirit) into the fire. He said a prayer and asked me to toss them into the fire. When they landed, he read them (the way they burned, the direction in which they landed, the piles or shapes they made, etc.). He then told me what it all meant. Not what he saw but what the spirits saw in me. The things he said were shocking and it felt very surreal. He told me things that he would not know (that I was starting a company, that I had children, that there were important things in my life that were unfinished, etc.). The most significant thing he said to me was that I had a huge fate – an important one. I still don’t know exactly what that means – but I can’t wait to find out. Lastly, he said that I was filled with peace, calm and positivity – which I will embrace and cultivate.

The Shaman asked if I had any questions that I wanted to ask the ancestors. I knew immediately what I needed to know . . .

I asked if my son (who is Guatemalan) would find peace with his heritage, his birth mother and his adoptive family? The Shaman gave me nine pink candles and asked me to toss them into the fire. They landed in a clump all pointing in one direction, except for two that bounced up and turned toward me in the shape of a V. The shaman was so animated when he spoke. He explained that the V represented my name (B and V are the same in the Spanish language) but it also represented outstretched arms. He said my son needed me and was stronger when I was with him. He said my son is scared and sad when I travel – but he understands that I need to and more importantly, that my son was proud of me. The shaman told me that my son will find healing and peace as long as I am by his side – that he needed me in order to complete this process. He said (in Spanish), “you are Jac’s mother and you are an essential part of his life”. This was music to my ears! His words made me feel more secure about the potential for a birth mother search someday.

With each question I asked about business, family, friends, relationships, the Shaman repeated the steps. He would chant and invoke the spirits then he would pray for an answer and healing for me. He asked me to direct my question to the ancestors (either out loud or in my mind) and toss my candles into the fire. It was surprising how many times the candles fell in the shape of a V — which always excited him. He said, “the candles even speak your name.” EVERY time he explained the meaning of the candles and the direction in which they fell he said things that shocked me – things about myself, my family, my friends, relationships, business, etc. that he did not know – only I knew. He told me how I would walk through these things and handle them in my life. Every time he told me what the candles said, he would ask me if the answer was what I was looking for – if it held meaning for me. Every single time, he was dead on. It was unbelievable. I’m certain I cried at least 5 or 6 times. The answers he gave were so meaningful. The words he spoke sang to my heart. It was a truly mesmerizing experience.

When I finished asking questions, after we had thrown at least one stack of every color of candle available, the Shaman read the fire itself. One of the things that the shaman noticed was the way the fire burned. He said that when the cigars turn very black it represents negativity. My fire was bright and serene. None of the cigars were overly charred – they all had a tip of brown remaining on them, or they turned ashen rather than black. He pointed out that the glass jars burned in the shape of a vessel or cup. That meant I was ready to receive and would be filled up. The shaman said it is often difficult to tell clients what the spirits say because it can be negative and people don’t want to hear that. Fortunately, he told me that I had very positive influences at work in my life. I was honored and am grateful.

The ceremony lasted nearly two and a half hours but I never would have guessed it! I was mesmerized, totally engrossed the entire time. I was also touched beyond words — deeply, deeply moved. It is still difficult to explain the experience fully but it was something I will never forget. The energy of the time spent in the Shaman’s presence, the intensity of the fire, the brightly colored candles melting on the altar, the scent of the herbs as they wafted into the sky creating links to the ancestors – it was pure magic!

Although I did not know what to expect when I arrived, I left feeling enlightened and enriched. As we were leaving, with renewed energy and my spirit awakened, I glanced back at the Mayan altar, set amidst the powerful backdrop of Iximché, it’s ancestral energy ablaze, and considered the legendary Mayan intelligence that built this place and keeps it alive today. Although there is great sadness in seeing the ruins, the vitality of Iximché and it’s Mayan heritage runs deep. This Shaman ritual was the perfect segue to my next adventure.

What an experience, what a day!

Bambi Wineland is a wife, mother of two internationally adopted children, a traveler and the Executive Director of Motherland Travel. Motherland Travel designs Heritage Journeys for families with children adopted from Guatemala, Colombia and SE Asia. The emphasis of these Heritage Journeys is on family bonding, building self-esteem and cultivating pride in a family’s multi-cultural heritage.