Last I shared with you I was in the middle of climbing Pacaya Volcano with my family as part our son Jac’s first heritage trip back to his motherland, Guatemala. 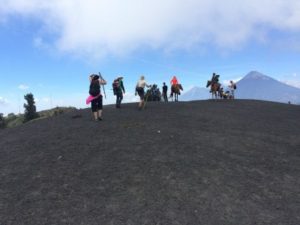 You may recall, we were scrambling to the top just as I realized the horses passed the tree where I last left Jac’s marble.

I take a peek under the rock, in the crook of the tree where Jac’s marble was hidden. There is nothing. The marble is gone. I look everywhere. I dig and dig and pull up the moss that had been sitting so perfectly in the crook of that pretty little tree.

IT. WAS. GONE.
Plan B — my husband had purchased a small carving of Jac’s Nahual at a local shop in Antigua. A Nahual is considered a personal guardian spirit or protective alter ego that is often represented as an animal in Mayan shamanistic practices. Jac’s Nahual is a Canil (a rabbit).

Brad grabbed the tiny carving out of his backpack and quickly placed it in the crook of the tree and covered it with the rock while I called to the kids and the guide to come back. Both kids jumped off their horses and ran down to us when they realized they had gone past the tree.

I knew Jac was nervous – I could see it in his face.

When he removed the rock there was no marble, only a Canil. Evidently, that tricky little Canil had been hiding in the crook of the tree where Jac’s marble was hidden in October. It appears that Jac’s Canil took the little red and yellow marble – the magic of Pacaya Volcano!

This was the story that Jac excitedly came to after he found his Nahual under the rock, in the crook of the tree, in the oasis, on top of the ravaged lava dome where his marble used to be. At first, I wasn’t sure if Jac would laugh or cry or maybe both.

He was disappointed that the marble was gone, but excited to find this new treasure in its place. He held me for a long time and it was clear he was not sure exactly how to feel.

As the mother of this beautiful, brown eyed little boy who had such hope, excitement and concern as we climbed this magnificent volcano, I am grateful beyond words for my husband whose forethought saved the day and helped Jac write a legend into his future.

The children had created a family flag to hang on top of the mountain to celebrate our accomplishment. Jo Jo climbed the tree where Jac’s marble had once been hidden and tied our flag in the branches.

Because Jac wanted to keep the carving of the Canil, he asked if we could leave Brad’s Nahual (a bird) in its place. He thought if we took, we must give back to this magical volcano – we must continue the “circle of love”.

In the future, the next person that lifts that rock, in the crook of the tree, will find a small carving of Brad’s Tz’ikin. 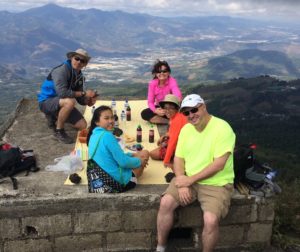 Everyday since returning from our trip, Jac proudly wears the necklace with his Canil around his neck as a reminder of his Guatemalan heritage and our journey to Pacaya.

We watched our family flag soar and we celebrated our accomplishments. We held hands and paid homage to the volcano and Jac’s ancestors.

I did not need to close my eyes to visualize my son standing on top of that mountain looking out over Lake Amatitlán, the home of his birth mother and his ancestors, I could see him standing in front of me beaming with pride.

Jac was proud of his accomplishments, of his gift to Pacaya, of his heritage. And I was beaming with pride because we are a family filled with love — no matter what.

I felt my family’s love seep into my veins.

Bambi Wineland is the mother of two internationally adopted children, a traveler, the Founder and CEO of Motherland Travel. Motherland Travel designs Heritage Journeys for families with internationally adopted children. The emphasis of these Heritage Journeys is on family bonding, building self-esteem and cultivating pride in a family’s multi-cultural heritage. Read more about her here www.motherlandtravel.com