Have you ever spent a day with elephants? In Thailand?

My day with Elephants, Part 1:

When I woke that morning in February 2016 I was feeling anxious about my day. I needed some coffee and I could smell it brewing from the downstairs dining room of my cute little boutique hotel in Chiang Mai! I threw on some sweats and ran down to fill up my belly before beginning the day. I LOVE the strong Thai coffee with evaporated milk – if I could only put it directly into my veins. And the breakfast buffet … it was a veritable display of art! The stunning fruit was arranged meticulously beside mounds of steaming Pad Thai, brightly colored vegetables gleaming nearby in their silver trays and dumplings of all shapes and sizes in bowls between each large chafing dish.

Some folks might not enjoy noodles and vegetables for breakfast but in Thailand, it’s all I dream about – and the fruit, oh and the coffee! Give me more, please!!

I had a big day in front of me and I was scared and excited beyond measure. Today was the day I was going to spend at two different elephant camps in northern Thailand. My guide came to pick me up at 8am and off we sped to my first destination.

Upon arrival, the guides asked me to change into the traditional attire of the mahout (the trained elephant handlers in Thailand) and showed me

to a dressing room. They handed me a heavy, loose-fitting blue canvas button down smock and matching baggy, knee length, slacks.

I was also given a wide brimmed hat and some rubber flip-flops. I was told it was going to be muddy and I would get wet! After the cursory photo shoot (this was clearly so they could laugh at me later!), they led me toward the infirmary.

This particular elephant sanctuary was for older elephants that had been retired from active duty. There was a huge elephant receiving treatments. Her mahout and a team of doctors had climbed the scaffolding that surrounded her and were checking her ears, trying to feed her through a tube and giving her injections.

She was so patient even though you could see by her skin that she was very ill. Her skin was droopy. They explained that she had not eaten in several days and they were very worried about her. An Asian elephant typically consumes about 300 pounds of food per day so for her to not have eaten in several days was showing.

I learned that Asian elephants often live to be 70+ years old and this gal was in her mid 60’s. My heart ached for her and for her mahout, who had been with her all his life. It was clear that regardless of how well the doctors got her feeling that day, she was already up there in terms of elephant years. She was magnificent and her sad eyes and tender touch of her mahout brought my first tears that day. 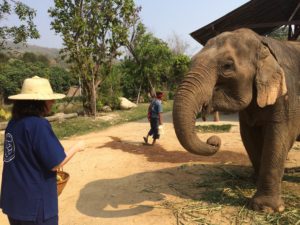 The next elephant I encountered was another huge female. She had a chain around her back leg that was casually attached to a post but not tightly tethered — more like you’d drop the reins of a horse over a hitching post. The chain was loose around her ankle and draped over the post gently, not staked. She was about 9 feet tall, 20 feet long and probably weighed about 10,000 pounds.

She was huge and intimidating but had the sweetest eyes I have ever seen.

They asked me if I’d like to feed her and handed me a large wicker basket filled with bananas. It didn’t take long until she was my best friend; her long trunk finding it’s way into my basket quickly and eagerly, yet ever so gently. While she was exploring my fingers, arms, even my legs it felt oddly comforting.

I was terrified at first but let her explore me and continued giving her the yummy treats – which she devoured whole! She was absolutely gorgeous and I swear she smiled at me the entire time I fed her!

Next, I was taken to an open-air elephant cafeteria where we created an elephant feast. It consisted of huge tubs of grasses, sugar cane, 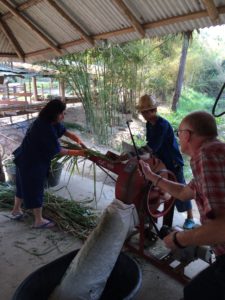 vitamins, fruits, and bark. After I’d run the sugar cane through a splitter and added everything into the mix, it took 2 of us to carry the tubs to the waiting elephants.

They became impatient and grumbled grumpily at each other while trying to grab a trunkful out of the tub. A couple of them even trumpeted fiercely while waiting for their tubs of food. I watched them greedily enjoy their lunch and felt a surge of pride knowing I had helped feed them that day! What a joy it was to watch them enjoy their healthy lunch.

We then meandered over to the elephant showers where I watched the oldest elephant at the camp (she was over 75 and her mahout wasn’t any younger) have her shower. Her skin was very wrinkled and speckled from years in the sun – much like mine. 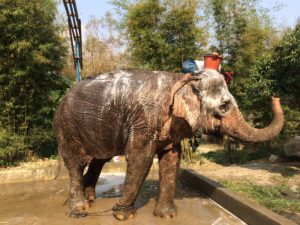 She was gorgeous and her mahout gently yet firmly scrubbed her skin with a stiff brush and soap then he would walk her under the shower head and spray water all over her body. They told me he did this daily to keep her aging skin from getting parasites and to make sure it was free from infections.

Much like the skin of elderly humans, she was at risk for sores, cuts, and injuries due to her skin being more fragile now. She swayed back and forth with pleasure as he sat atop her back and scrubbed behind her ears and around her face. It was a loving and beautiful site to watch.

We also wandered through the elephant graveyard and I cried amongst all the huge mounds of dirt and touching gravestones. It was clear how loved and cherished these gentle creatures were.

I also got to spend some time creating vitamin balls for the aging elephants as well. We dug into buckets of dried fruits, vitamins and tasty nibbles that we then worked into softball-sized treats. The elephants LOVED them! You’d never have known that it was their medicine!

My last experience at this camp was to wash an elephant in the river! It was unbelievable! Up until this time I had been at the camp on my own with my guide and a local helper but I joined a group of 4 or 5 other travelers and we followed a huge elephant down to the river. 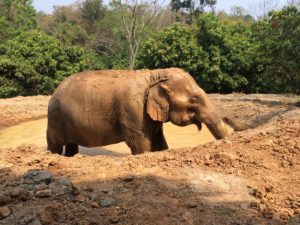 The mahout led her first into a mud pit where she covered herself from top to bottom in mud. It was hysterical watching this gentle giant splash
around in the mud like a child! Next, the mahout coaxed her into the river and we were given buckets and brushes.

She was unmoved by our presence and simply laid down on her side in the river and allowed us to scrub her body and splash her with water. She seemed to thoroughly enjoy it! She’d splash us with water as she moved around and if we weren’t careful, we might even get a blast of water from her trunk! It was such a fun e 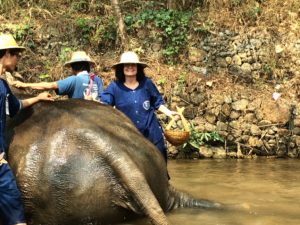 xperience and my guide was correct, I was soaked and it was glorious!

I had never been in such close proximity to an elephant before, let alone touch one. I was deeply moved. They are amazing, gigantic creatures that I felt profoundly connected to during the hours I spent at this camp. There is much talk about elephants and tourism.

It’s a discussion I have had with many people and I will try to dig into the concerns more deeply in my upcoming blog posts. What I know for sure is this day was just beginning and I was touched very deeply.

Next week I’ll continue with my afternoon camp experience. It was one of the most remarkable days of my life and I look forward to sharing more with you next week!