The Conversation About a Birth Mother Search Continues

Last week I wrote about a conversation my son, Jac, and I had while eating lunch over the weekend. The conversation was about Jac being intent on finding his birth mother. As I explained, I have some reservations because it’s been a very difficult year for Jac, but I am open to the discussion. Jac has remained insistent about the search throughout the week, having asked what my thoughts were almost every day. We are continuing the discussion as a family and we will meet with his counselor this week as well.

I’d like to share with you a little bit about Jac and his relationship with his birth mother … Jac has kept a framed picture of her on his desk in his bedroom since July 2011. I know this date because it’s when I was preparing to take my daughter to China for her Heritage Journey. We were going through her adoption file for information about her foster mother and Jac asked if we could also look through his adoption file – so we did. That’s when he found the picture of his birth mother. The picture profoundly affected him.

In the picture she is holding him, they are still in the hospital in Amatitlan, Guatemala. It was taken moments before she handed him to the social worker that would have delivered him to his foster family and then eventually to another family (us) for adoption outside Guatemala. He looks at the picture frequently. Yesterday I finally had the strength to ask him what he sees in her eyes. He says she is sad, and that makes him sad. I have to admit that I see sadness too and he’s right, it is painful. 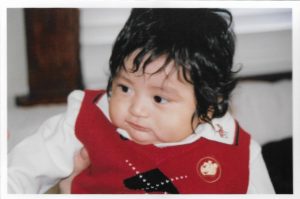 We do not know the circumstance around my son’s being given up for adoption. All we know is that on August 13, 2004, a tiny little black haired boy was born. On his birth certificate is her name and his – Juan Antonio Contreras (thus how we came up with Jac – his initials). No father is mentioned. She was 19 years old and although Jac was born in Amatitlan, his birth mother’s place of residence is listed as Puerto San Jose – the principal sea-port on the Pacific Coast of Guatemala.

Jac has made many assumptions about his birth mother – the most important of which is that she wants to know him, at least to know he’s ok. I hope that’s true but there are no guarantees. I think about his birth mother on a regular basis. The two of them are connected in a way that Jac and I are not and never will be – and that is ok. I always knew I shared my son with another woman. I am grateful beyond measure that she was brave enough to carry him to full term and give him up so that we could find each other. I may not have given him life but the love I feel for that boy is as raw and sweet and immense as anything I have ever felt.

You should also know something about me … I fit the statistics perfectly for people with children who have adopted internationally: 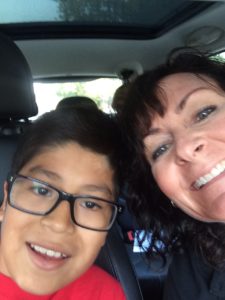 They’ve got me pegged. And when Jac wants to talk about finding his birth mother, it brings up more insecurities than I’d like to admit.

But back to Jac … after our conversation last week I asked him if he had ever talked to his father about any of the things he talks to me about and he didn’t remember if he ever had. So I insisted. I told him that he needed to tell his dad everything he told me about his fears, his insecurities, his thoughts, his feelings – all of it. Later that day we had an opportunity to visit with his dad and I explained to him what had transpired during our lunch. I left the boys alone to talk and the most remarkable thing came out of that conversation!

Brad asked Jac if he could take some time (a day or two) and think through all of his emotions. He asked if Jac would list his thoughts in a document for us to review and to discuss with his counselor – it was such a boy thing! Jac agreed and even did a little bit of research on his own. He created a spreadsheet in Google Docs and has given me permission to share his work. This is Jac’s spreadsheet (I added the headings after he shared it with me): 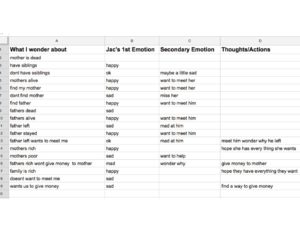 It’s clear to see that Jac has thought about this a lot but, as expected, his feelings are those of a 12-year-old boy. I empathize with him deeply however because almost all of these are thoughts that have also occurred to me (frankly, all except for anyone being rich – that would be an anomaly).

We are meeting with Jac’s counselor this week. My greatest hope is that the counselor will tell us that Jac is doing beautifully after a stressful year filled with much emotional upheaval but that we should go full steam ahead with the search. Again, I hope that’s true but there are no guarantees.

Next week I’d like to talk a little bit more about some of the comments that my readers have shared with me. This is shaping up to be quite an adventure — I’m glad you’re in this with me.